Home Agama World Religions in the Age of Transhumanism: A Comparative Study of Islam...
AgamaEsaiFilsafatSains

World Religions in the Age of Transhumanism: A Comparative Study of Islam and Buddhism 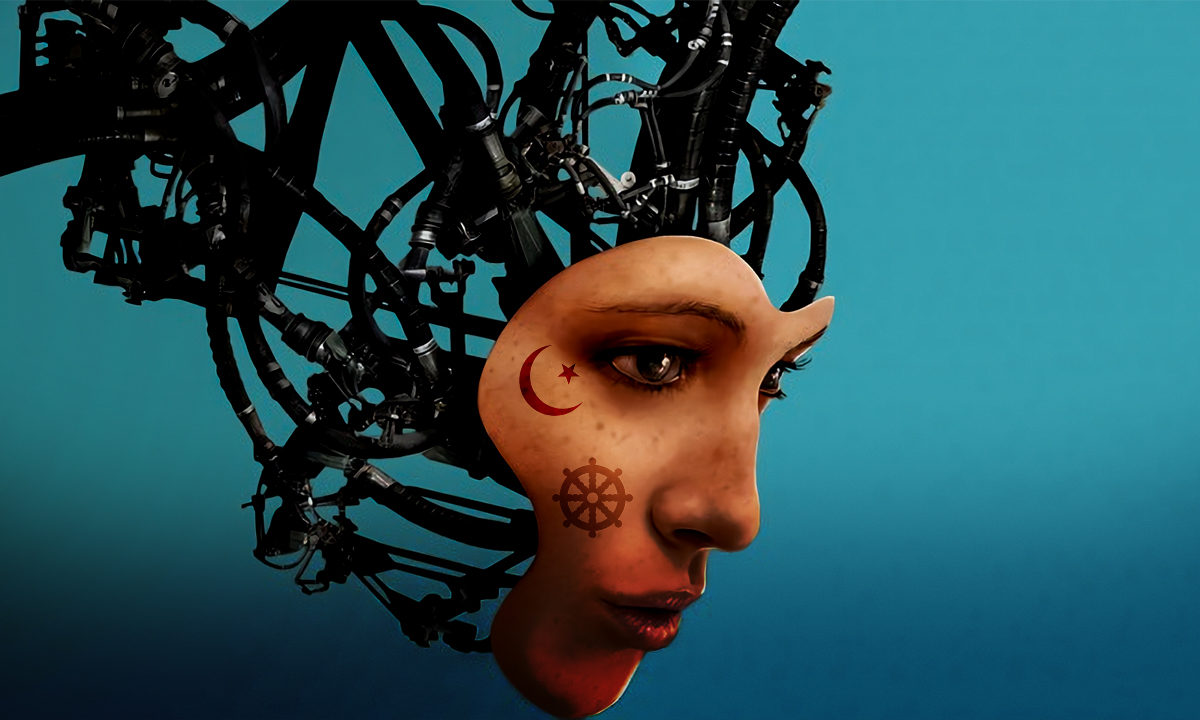 The biggest challenge faced by religion in this century is the enhancement of science and technology which are increasingly narrowing the role and function of religion in human life. Today, for example, we trust Google’s weather forecast more than a rain handler (pawang) when organizing events; we trust nanotechnology more for cancer therapy than miracles; or even we prefer to go to the doctor to do the IVF program rather than pray continually as was done by Hajar, Abraham’s wife. These facts make studies in theology compete to offer answers that enable religion to be rationally maintained. Starting from the independence approach based on non-overlapping magisteria argumentation; that religion and science have a completely different realm, to the integrative approach which tries to affirm that science and religion can go hand in hand.

Such debates have actually taken place since the Copernican Revolution in the 16th century which ended the church’s creed with the marked collapse of the geocentrism view which was then replaced by heliocentrism. The religious authority—which was represented by the Church—was later shaken by Darwin’s theory of evolution which went against the doctrines of creationism which at that time were the main doctrines of Christianity. Today, the position of religion is again at stake in the enhancement of science and technology which was built underneath a large umbrella called transhumanism.

We can say that transhumanism is likely the culmination of human civilization, if it really can be realized. The big goal of transhumanism is how to create immortal humans by merging them with technology through genomics, pharmaceuticals, nanotechnology, robotics, artificial intelligence, and several numbers of prosthetic devices. It sounds exceedingly utopian and almost unbelievable, but it does make sense theoretically. We can easily find human organs that are replaced by robots (cyborgs) today; prosthetic arms, legs, eyes, etc. (Mercer, 2015: v). The project of mind uploading into the computer led by Elon Musk has also begun to find a bright spot. It is completely possible that we will be able to live forever, or at least much longer, even without a biological body.

With those in mind the eschatological doctrine of religion, especially world religions, then becomes very problematic. We have to question several concepts such as destiny, death (ajal), nirvana, heaven and hell, etc.; are those concepts still relevant? In short, to what extent can religion still be relevant if transhumanism is completely realized and reaches the singularity between human and technology? It is in these questions that this paper will be argued by taking a comparative study between Islam and Buddhism, both of which have fundamentally different concepts of theology and eschatology.

Transhumanism and Buddhism on overcoming Dukkha

One of the reasons why Buddhism became a religion which is quite important to propagate in the narrative of transhumanism is because of the basic teaching of Buddhism which teaches the four noble truths about Dukkha; the fact of dukkha, causes of dukkha, the end of dukkha, and the path to liberation from dukkha. In Buddhism, dukkha is a fundamental fact of life that cannot be denied because it is a facticity that humans have to embrace. Life is dukkha because we all are born in a factual world; limited, imperfect, sick, mortal, and unsatisfied (Hansen, 2008: 8).

It is in the problem of dukkha that transhumanism gives concrete answers in a sense that it is based on the assumption of materialism. Transhumanism with all forms of enhanced technology is aimed at the same goal, namely to overcome existing dukkha due to the stretching of human desire and limitations. Pain that human suffers is diminishing with the help of technology that enables humans to transcend their biological limitations. It makes sense to suppose that when we can get rid of all sufferings with biomedical technology given by transhumanism then we do not need Buddhism any longer.

However, the answer given by transhumanism is not enough because there are two reasons that make dukkha exist; tanha (endless desire) and avijja (ignorance) (Hansen, 2008: 8). Transhumanism, I argue, only overcomes the last cause, namely dukkha caused by human ignorance that we can actually overcome all kinds of biological suffering with the help of science and technology. So far, transhumanism in all of its narratives has not provided answers on how to overcome dukkha caused by unlimited desire.

Buddhism clearly has the answer to how humans escape from dukkha through the Hasta Ariya Magha path, or the Eight Noble Paths; right view, right thought, right speech, right action, right livelihood, right effort, right mindfulness, and right concentration. The eight noble paths, in Buddhism, are considered to be able to bring humans into Nirvana, a condition in which dukkha ends because of the cessation of greed (lobha), hatred (dosa), and delusion (moha) (Hansen, 2008: 9).

Transhumanism and Islam on the concept of death

An American broadcaster, Larry King, once stated that the only reason religion still exists is death. If there is no death, religion is no longer needed (Trothen, et.al., 2017: 286). It is in this assumption that we can surely understand how the narrative of transhumanism with the ambition to overcome death can be the most problematic for the existence of religion. There are only two answers that can dismiss the problem: religion is not only a matter of after life or transhumanism is not possible to realize an immortal human.

So far, only the first answer can be examined because the transhumanism project has not yet been completed. Therefore, an important question that can be asked is whether religion is still relevant if there are no more deaths? In the basic foundations of Islamic teachings, the question is obviously very fundamental and substantial. Almost all Islamic teachings, from theology to even morality, are all based on their belief in the Day of Judgment; “Then Allah will punish him with the greatest punishment. Indeed, to Us is their return, then indeed upon Us is their account (Sura Al Ghasyiyah: 24-26)”. Then the question, what is the rest of the teachings of Islam based on?

If we want to try to accept the second answer in which the immortality offered by transhumanism is impossible, Islam is still confronted with the problem of litigation on the Day of Judgment. It is believed in Islam that humans will be resurrected after death with complete bodies so that their bodies can give the witness when humans live. The question is, what about cyborg humans, whose limbs can be replaced many times with robots, or what about organ transplants; who is responsible for the sins of organs transplanted from other humans?

The only way for Islam to remain relevant in the technological age is to radically interpret the concepts in Islamic teaching; heaven-hell, sin-reward, fate, death, etc. This is in line with what was stated by Aisha Y. Musa (Maher, et.al, 2009: 128) that when Radical Life Extension (RLE) and potential immortality comes true, we need to redefine all eschatological concepts in Islam radically.

What is left from religion?

Many predict that religion will no longer be relevant when humans are fully rational and science has given all the answers that religion cannot do. From classical thinkers like August Comte to new atheism figures; Sam Harris, Richard Dawkins, Daniel Dennet, they expressed the same thing optimistically that one day humans will leave religion. But in reality, after hundreds of years, Comte proposed his social postulate, there have not been any significant signs that religion has begun to be abandoned.

Thus, we come to the question of what science and technology cannot provide and can only be obtained from religion. If we agree with Larry King’s statement that the root of religion is fear of death and the days after, the logical consequence when immortality can be achieved by transhumanism then religion will no longer be relevant. However, as I have explained above about the second noble truth of Buddhism, namely tanha as a cause of human suffering in my consideration is an important key where Buddhism will remain relevant as long as desire is still inherent in human beings. The only offer given by transhumanism to overcome desires is through biomedicine which requires a person to take drugs such as analgesia to quell these desires. However, this has the potential to generate new desires, namely the desire to take the drug itself. That is why it is called endless desire.

From that point, I can firmly conclude that the important things from religions that make them remain relevant are the psychological spheres offered, namely the meaning of life which is actually full of dukkha; suffering, disappointment, etc. And this is a big problem for Islam, which most of its teachings are built on the foundation of ‘fear’ (taqwa) towards God, the last day and the day of retribution.

“You who believe! If you have fear of God, He will give you a criterion (by which to judge between right and wrong) and erase your bad actions from you and forgive you. God’s favor is indeed immense. ”

Unlike Buddhism which can be said having no concept of divinity and the hereafter, Islam needs to radically redefine the entire foundation of its teachings in order to remain relevant in technological enhancement that can give the answers for those fears.

Apart from many things that must be redefined, Islam actually also has important teaching that makes it possible to remain always relevant, namely about tawakal. Tawakal means resting and relying fully on whatever happens to God. The teaching is almost in line with the condition of nirvana in Buddhism which is illustrated by the absence of greed and hatred because by being tawakal, the mind is conditioned to accept whatever happens. If Buddhism calls this state of mind as enlightenment, in Islam it is called nafsul mutmainnah (a soul illuminated by light).

That is what remains of religion, I argue, that would be still relevant when the singularity between human and technology comes true. As Karen Armstrong once stated in The Case for God, the task of religion should not overcome the problem of logos which is the realm of science. The task of religion is like art which gives meaning to a life filled with disappointment, despair, and suffering. Within such a framework of understanding, religion will always be relevant regardless of how science and technology are able to give humans unlimited abilities. Science and technology can never give a reason why life is meaningful to be lived.